About Us:
The Chicago Cuatro Orchestra

Contact Us
MORE ABOUT US:
Our Mission: The Chicago Cuatro Orchestra Project’s mission is to educate and promote the Puerto Rican culture using the national instrument, the cuatro, as the main tool. It is our purpose to teach and refine new generations of “cuatristas” (cuatro musicians) so they become the future leaders, instructors, composers, and conductors of the orchestra. 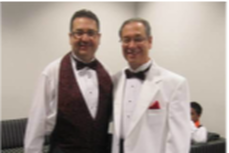 The Chicago Cuatro Orchestra was founded by Orlando and David Rivera, two professional music teachers from Chicago, and has performed in many important cultural venues. Among others, the Orchestra has performed at The Chicago Symphony Orchestra Center, The Auditorium Theatre, The Great Chicago Theater, and at The Millennium Park Harris Theatre.
​          The future plans are to duplicate the Cuatro program in different cities of the U. S. A., and to create a national Cuatro program network. With this network in place, The Chicago Cuatro Orchestras’ qualified staff will train music teachers, and will expand the program all over United States, creating one day, The U. S. National Puerto Rican Cuatro Orchestra and Festival.
Orlando Rivera is features on CBS Channel 2 News segment of 'Someone You Should Know'.